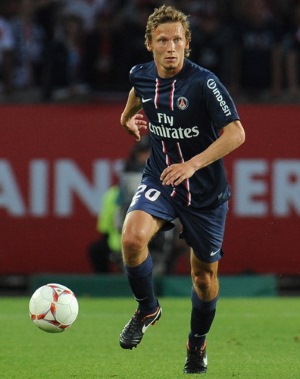 Valencia CF is reportedly interested in 26 year old Paris Saint Germain midfielder Clement Chantôme. The French midfielder is at the bottom of the pecking order of PSG's midfield and was loaned last season to French side Toulouse. He only has one official appearance for the French national team. In addition, to playing in central midfield, he also has the ability to play on the right of midfield. Sevilla is the other team vying for his signature which would cost in the region of 6 million euros (transfermarkt estimate).

Any thoughts on Clement Chantôme? Would you like to see him in Valencia CF or would you opt for Enzo Perez or Zuculini?
Posted by Amunt.Valencia at 7:51 PM
Email ThisBlogThis!Share to TwitterShare to FacebookShare to Pinterest
Labels: news, transfer speculations
Newer Post Older Post Home