Vicente Guaita on the exit door 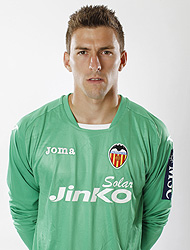 Vicente Guaita is not pleased with his situation in Valencia CF, being second goalkeeper to Diego Alves and is said to be looking to leave the club if an offer comes his way in the summer.

In the previous seasons FC Barcelona was interested in him as well as Liverpool and Milan, but the interest has cooled off as he has been second choice for much of this season under two coaches.

There are some clubs looking at how the situation develops with Guaita and could offer to buy him, few clubs from Germany are looking into Guaita, as well as few Spanish clubs who would love to have Guaita as their primary keeper.

Personally I think Vicente Guaita is going to leave in the summer and Valencia CF will either bring some new young goalkeeper on a free transfer or promote some from the youth squads to the first team.