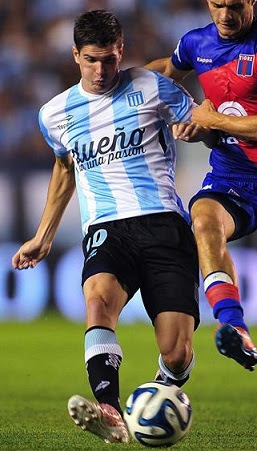 Valencia have finally completed the signing of 19-year old Argentinean player Rodrigo de Paul from Racing. The deal cost approximately 4.7 million euros, and is dependent on him passing the medical. Also, 10% of future sale/loan goes to Racing. It is a five-year deal that will keep Rodrigo at Valencia till 2019 with a whopping 40 million euro release clause and could reach 50 million depending on how he performs. This is again part of Valencia's movement to keep its talents at the club and avoiding an Isco situation from happening again.

Apparently, Rodrigo de Paul turned down Udinese, Inter and Arsenal just to accept this Valencia deal showing just how much he wants to be here (although I think this is the work of Pizzi). This makes Rodrigo de Paul the first signing for Valencia in this transfer window.

With this signing also comes criticism from Alfonso Rus (President of the Council of Valencia)  who complains about spending money before new ownership arrives and while already having a squad of about 31 players (including those on loan). To this Salvo responded that the sale of the club shouldn't mean that we stop all operations, we have to constantly work to improve since we don't know when the new owners could arrive.

Anyway, I'm really happy about this signing. I've seen some footage of his game play and it is quite impressive. Good luck to him!
Posted by Amunt.Valencia at 7:04 PM
Email ThisBlogThis!Share to TwitterShare to FacebookShare to Pinterest
Labels: news, official transfers
Newer Post Older Post Home