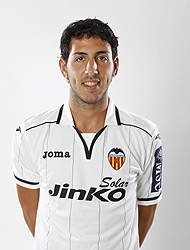 Diego Simeone is said to be a big admirer of the player and is looking to strengthen the squad for the next season and has identified the central midfield as an area that could be improved over this season and thus comes Daniel Parejo. He has great passing ability, vision and ball possession abilities and has been one the best Valencia players this season, albeit with several big slip-ups's over the season.

Daniel Parejo currently has a contract with Valencia CF till June 2016 and his buyout clause is said to be around the 25 million euros region.

With Valencia CF out of any European competition next season and guaranteed to finishing disappointing mid table position this season, Parejo is likely to strongly consider moving on to Atletico Madrid especially if they come officially asking as the Primera Division champions and/or Champion League champions with a bigger and improved contract.

Diego Simeone knows his negotiating position is strong and has a big chance of succeeding of luring away Daniel Parejo away from Valencia CF, even if Valencia CF doesn't want to sell. Daniel Parejo can insist on a move away from Valencia CF and Valencia CF would be virtually incapable of doing anything about it, since the club policy is to always sell players who don't want to play for the club and Dani Parejo would certainly be perceived that way if he was to ask for a transfer move to Atletico Madrid.

The only thing that can save the situation with Parejo is if Valencia CF get a strong new owner who instantly invests in the club, covers the debt and opens the purse for strong summer signings. At that point Parejo might want to stay and be a part of a new project of team building and playing for future accolades.
Posted by SlickR at 9:33 PM
Email ThisBlogThis!Share to TwitterShare to FacebookShare to Pinterest
Labels: news
Newer Post Older Post Home