Match fixing in La Liga is the norm 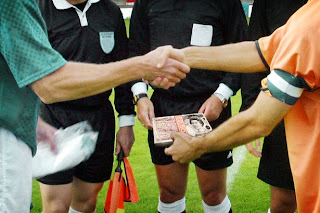 Match fixing in Spanish leagues, especially Primera division is prevalent and the norm. Match fixing is way bigger than it was in Italy, in La Liga its systematic and supported by the governing body. Those who don't go along with it are swiftly fired.

Many teams have fixed matches, but its only the norm and standard practice for Barcelona and Real Madrid, where referees will 100 out of 100 times whistle in their favor.

These are not just small mistakes, these are blatant match fixes, these are deliberate decisions to put Real Madrid and Barcelona ahead.

There should be major investigation into match fixing in La Liga, its too big, its too obvious to ignore anymore. I wrote a similar article last several months earlier as well, can't find it right now because for some reason the search functions doesn't work, but I'll link to it once I figure out why the search doesn't work and fix it.