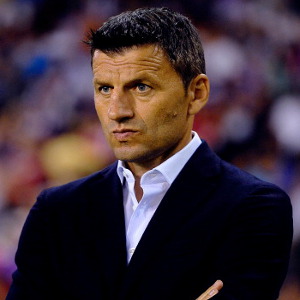 Miroslav Djukic could have his last game as coach of Valencia CF this Sunday in the match again Getafe. Valencia CF president Salvo earlier in the season claimed that Miroslav Djukic is safe for the whole season, but he is forced to say that to keep things calm and quiet, another loss would mean the end of Miroslav Djukic and even a win, which is highly unlikely may still be the end for him, even if it means just prolonging the stay a little.

Getafe are playing some good football this season and it shows on the table, as they are in 6th position with 19 points, only 6 bellow 3rd placed Real Madrid. This isn't guarantee that they will finish top 6 at the end of the season, but with 11 games they've shown they can hold their own against most teams and certainly Valencia CF is one of those teams.

Getafe are playing at home and in the situation Valencia CF is right now, Getafe are the clear favorites to win, which at this point I think I wouldn't be too bummed out if it means Djukic gets ousted. I just don't trust him anymore to lead the team to good things and everything I've seen from him tells me that he is not going to get things right.

For example he keeps playing players out of position, he keeps on insisting on the failed central defensive duo of Mathieu and Costa when Ruiz has proven that he is way more competent than Mathieu and R. Costa right now and in the few matches he played Valencia CF actually defended competently.

The team also doesn't have wing play, at least not in a good solid way that would enable them to penetrate opposition defenses and to me this is a failure of tactics and training. I mean you got to practice moves in attack so that players know what to do and what is expected of them, right now I feel like its free for all and no one really knows what to do or what is expected from them to do.

We have 3 great attackers on paper in Pabon, Postiga and Jonas, but somehow can't utilize them properly. I mean Postiga is great on positioning and dead ball situations, not very technically gifted, but has a sense of goal, Pabon is the type of player who likes to cut in from the side, run at players, dribble past one or two players and he showed that he is really good at it at Betis, and we have Jonas who is an assist machine and who's proven this time and time again each season. He is a sort of poor man's David Silva that operates through the center, rather than through the wing, yet this season he hasn't done much.

To me this means they aren't utilized properly and that the team isn't functioning as a unit and this can be due to lack of match practice in training, lack of build-up practice, players being out of position often, or all of these combined.

I mean on paper the Valencia CF team should perform way better, this is not hugely weakened team from last season, in fact we lost Soldado, but gained Pabon, Postiga, Michel, Ever and Canales are fully fit, we have a more robust defensive midfielder, etc...

Again, at this point I don't trust that Djukic can improve the team and lead them to Champions League position, I actually won't mind if Valencia CF lost to Getafe so that we can get a new manager. I know the financial situation is bad and that if we have to pay Djukic all the money of his contract it would be terrible, but I hope that Djukic would be honest with himself, realize that he is terrible and can't lead Valencia CF and come to an agreement to reduce the penalty of breaking the contract and get paid up till 31 December and obviously be free to look for a new job. This would be the best possible scenario, though I'm not so sure if Djukic is a fair and honest man.

What I know for certain though is that if Valencia CF lose against Getafe that would be it with Djukic, I just hope that the next manager that replaces him is actually more reputable and more able to lead a club like Valencia CF.
Posted by SlickR at 3:38 AM
Email ThisBlogThis!Share to TwitterShare to FacebookShare to Pinterest
Labels: editorial
Newer Post Older Post Home