Of course Atletico Madrid, Sevilla, Real Betis and surprisingly Villarreal this season wait in the wings as the likely remaining champions league spots challengers and there is big competition.

But anyways this match was basically the story of Valencia CF for much of recent history; inconsistent, terrible, brilliant, fighting, disappointing, surprising. All of these things into one match is what is a dual personality Valencia CF. 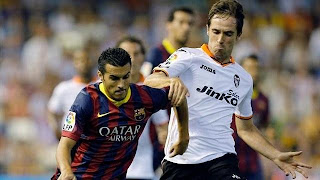 The one thing we can definitely conclude after three matches this season is that we have a problem of losing the ball around the middle and our defensive positioning and lack of fast central defenders hurts us in these positions and ends up costing us with goals in our net.

The first goal of FC Barcelona was with one such mistake by either Canales or Michel, couldn't quite make it out from my stream, the second goal for Barcelona was from a lost ball in the middle by Banega and that cost us a goal as well. Third goal was a classic and normal goal I would say, any defense can succumb really, so not as big of a deal, but the two goals before it were preventable and shouldn't have happened.

Now the central defense was bad, but its not terrible, the big problem here is that both Rami and Costa are slow and thus they can't compete when a fast counter attack like that happens and they simply get outrun. Our defensive positioning is also lacking in these type of positions as both the full backs are so far forward in these cases they can't do anything, they can't help in any way.

So, I'd say a combination of poor individual defending, poor defensive positioning and the tendency for the players to lose the ball in midfield is costing Valencia dearly. You don't want to be risky in midfield if you have slow defenders and  lackluster defensive positioning, you need to play more careful. I think this is mostly a tactical error as the coach should know the team strengths and weaknesses and advice the players how to play and I strongly believe he needs to advice them to be extremely careful of the passing in the middle, especially when coming out of defense. Its not a problem if the team loses the ball from attack, but when coming out of defense then its a big problem as we've seen.

So yeah, two of the goals were by mistakes made in the middle and the type of defenders that we have who are very slow, but also the defensive positioning overall which has the team with two fullbacks really high up the pitch.

The third goal by Barcelona was generally a good play by their players, though Ricardo Costa maybe could have reacted faster, I also think Fuego generally failed to provide appropriate cover to prevent this type of passes as well and I don't think he was helped much by Canales either who should have been more mindful of covering on the right side there.

Valencia's goals came from rather good play in that the team was really all out attacking and Joao Pereira's cross was accurate towards Postiga and this one was able to score from a good position.

The second goal came from a Banega corner and it was Postiga again who headed the ball into the net and this was all preceded by few good actions in front of Barcelona's goal.

Overall I think Valencia CF lost the first half, but made amends by scoring two goals in a span of 2 minutes of just all out attacking and pressure on Barcelona and the second half belonged to Valencia CF who controlled the match, were more confident, were able to string good number of passes and were able to attack Barcelona and be dangerous to their goal, while Barcelona also had their chances to increase their lead, but their play was overall weaker and they were on the defensive.

I think the game really slowed down for Valencia CF and the team had lower chances of scoring when Feghouli was introduced. He came in for Banega and didn't do anything. His performances this match and overall this season and even in the preseason have been terrible and I would have liked to see him loaned out and Viera staying, but that's another article.

Overall the team recouped from the 3 goals deficit disaster where they could barely move out of their own third and fought back and made the result and loss bearable, but now the team is still on only 3 points from 3 matches and already falling behind in the race for champions league spots. Additionally now there is added pressure of winning and doing good in the next few matches, so that weighs heavily on the players and coach as well.

I think one possibility is that we are going to see a change in the defense, I think Djukic was devastated by the poor defending and even though some of the situations were hard to deal with, if you are a top defender you are going to be able to deal with and that is what makes you good, failing time and time again is a sure sign of poor defending.

I also hope to see better tactical knowledge and for Djukic to speak to the players where to play safer, where to play more aggressive, that sort of thing to prevent these goals from lost ball situations.

Player Ratings:
Diego 6.5 - Insecure when passing to players and made some bad, risky passes and you could argue could have done more for the first goal for example, but he did made several saves, especially two consecutive saves in the second half where Barcelona could have sealed the deal. Largely let down by the defense though.
Joao 7 - Mostly dealt with the threat of Neymar even though he had big lack of support from Canales and was like a one man army having to deal with everything, he was also the sole wide player on the right and played half as a winger, half as a defender. He had a good night though and provided the assist for the first goal.
Rami 4 - Once again generally insecure performance, slow on the feet, slow to close down, lack of understanding with Costa, you name it. Not a defender that I would trust and be secure with.
R. Costa 4 - Usually the more confident and more stable of the two, this match he was really insecure and generally too unaware and too slow to react. Between the two central defenders Valencia CF could have easily conceived 2-3 more goals.
Guardado 6 - Not troubled by Pedro at all, he covered his position well enough, but was not as adventurous or capable going forwards as Joao. Had one good chance where he shot from close range, but the shot was very inaccurate.
Michel 5.5 - Was a bit better than Canales in his play and more solid defensively, but had a frustrating performance. I think he was the one that lost the ball for the first goal, but either way his score is low enough without it as well that it won't even matter much.
Canales 5 - Largely ineffectual and it was no surprise to me at least as he was playing in a very deep position and he's a very forward midfielder. Was supposed to play as a makeshift right winger and cut inside, but mostly failed to do so.
Fuego 5 - Nothing of notice from the defensive midfield, I feel like he was rather lackluster closing down the Barcelona players and didn't provide much to the game overall. Very simple, easy passes and staying out of the action.
Banega 6.5 - He lost the ball for the second goal very easily, it shouldn't have happened, but was one of the better players overall on the field, especially in the second half where he was the creator of most of the movement and chances. Had one great pass to Pabon in the first half, tried a shot on goal as well and generally contributed well going forward.
Pabon 6 - Very active on the left and gave Barcelona trouble, he had two shots on goal and combined well with the other players. Promising performance for his first match in a Valencia CF shirt after only few training sessions.
Postiga 7.5 - Scored two goals and found himself in good positions, generally fought harder compared to previous matches and was more active.
Subs:
Feghouli 4 - Didn't contribute anything. As good as if he wasn't on the pitch.
Jonas 5.5 - Had one shot that hit the post and contributed in few attacks, but unable to change the outcome of the match.
Parejo N/A - Not enough time.
Posted by SlickR at 10:46 AM
Email ThisBlogThis!Share to TwitterShare to FacebookShare to Pinterest
Labels: match report
Newer Post Older Post Home