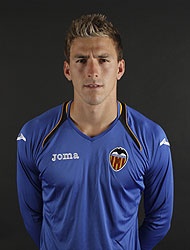 Valencia CF president Salvo declared open season on Vicente Guaita after the goalkeeper revealed he is unhappy being a substitute at Valencia CF and wants to leave. While Arsenal have backed off due to the 20 million euros asking price by Valencia CF, the club have now called for offers to come in for Guaita as the club is ready to sell him at even lower price.

The club is going to listen any offers of 15 million euros and above, though with Arsenal backing off, its unclear if there is going to be any such high offers as the goalkeeper market is quite saturated and not valued as much these days, not to mention that clubs from Spain are mostly bankrupt and Italian clubs are cutting their expenses significantly as well, so the only big offers can come from England, but most clubs already have standard goalkeepers.

Going with this story is also coach Djukic who had a meeting with the players to remind them that matters of playing time, transfers and the like are not a public matter and that the players need to respect the club, their own teammates and the coach and to prove themselves on the field if they want to play.
Posted by SlickR at 9:31 PM
Email ThisBlogThis!Share to TwitterShare to FacebookShare to Pinterest
Labels: news
Newer Post Older Post Home