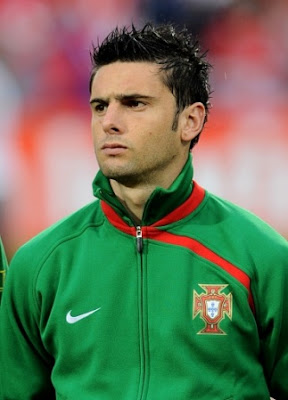 Report just came in that Helder Postiga will be a Valencia player this season with an agreement finally reached between the three parties. The negotiations were seemingly deadlocked with Real Zaragoza asking for 4 million euros and Valencia not willing to pay more than 3 million euros. However, now the agreement has been reached for a 3 million euro transfer plus variables (20% more if Postiga scores a certain number of goals). All that's left is deciding the player's wages, undergoing the medical and the player's signature before he is presented at the Mestalla. He will not be joining the squad in the USA but will probably be available for the Orange Trophy match against Greek club Olympiacos. The agreement for the transfer consists of 3 year deal. With the transfer about 98% certain at this point, he will be Valencia's 4th signing after Michel, Oriol Romeu and Javi Fuego.

Well, we mentioned a while ago that Postiga is not worth the money that is being spent on him, be it 3 or 4 million. He is past his prime and 30 years old. So...what is the club thinking signing him for 3 years???!!! However, it seems he will play a role similar to Nelson Valdez. The striker to replace Soldado is yet to be decided though and Braulio is now looking at strikers in Germany and Belgium after the English clubs refused to let loan or sell their strikers. Well, there you have it. We can only hope that he can fulfill his role properly and be worth his money.