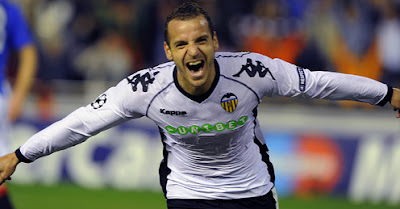 There have been a lot of interested clubs for Valencia's star player, Roberto Soldado. Up until now, most of the interest came from the English Premier League, specifically Liverpool and Tottenham, who in recent days expressed readiness to paying Soldado's termination clause of 30 million euros (expected very soon). Now Serie A club, Napoli, under the former Valencia coach, Rafael Benitez, has also joined the race for Soldado. Napoli has recently sold their ace striker, Edison Cavani, to the wealthy PSG for 63 million euros. As such, Napoli need a proven goal scorer to replace Cavani and their interest has found Soldado. With the cash that they just got, they have more than enough money to pay the buyout clause and an urgent need as well since the gap felt by Cavani is a big one and top strikers are being taken by other clubs.

So now, there are three clubs that might pay the clause and are able to do so. Only Napoli is in the Champions League between these clubs which may provide an extra incentive for Soldado. We stated time and time again that Soldado is our key player and that it is about time we keep our players. However, upon paying the buyout clause, the decision falls upon the player not the club. Let's hope his heart is in Valencia and not elsewhere.