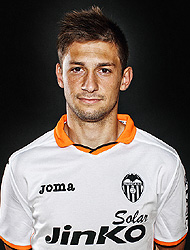 The youngster Fede who came in from the B team to train with the first squad this preseason has really impressed everyone in Valencia CF, from the staff to the coach and as such Valencia CF decided to offer him a new improved contract that would keep him with Valencia CF till 2017.

As you know Valencia CF has lost several youth players, most importantly Isco for not offering them better contracts with high release clauses, so they obviously didn't want to repeat the same mistake with Fede.

I'd say he is one of the most prospering youngsters in the squad, his pace, shooting ability and composure for such an inexperienced and young player are tremendous. If he can just be consistent he can easily displace some established first team players and bench them.
Posted by SlickR at 7:22 PM
Email ThisBlogThis!Share to TwitterShare to FacebookShare to Pinterest
Labels: news
Newer Post Older Post Home