21 year old spanish midfielder, Oriol Romeu has been linked with a move to Valencia. The youngster who graduated from Barca academy currently plies his trade in England with Chelsea FC. Romeu who has 2 years left in his contract is unsure of his future at Chelsea under new manager Jose Mourinho. It is certain Romeu will be a fringe player under Mou. He may welcome move to other clubs for more playing time. 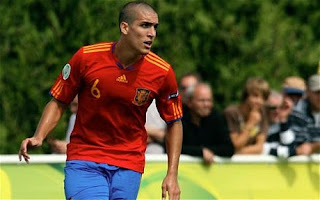 Valencia CF are in a serious need of a defensive midfielder after key midfielders Tino Costa and David Albelda left the club. After losing out on Champions league spot to Real Sociadad on last day of the season, Valencia are in some sort of financial problem. So a season long loan deal and option to buy would be a good deal. 21year old  is a good player in the mould of Sergio Busquets. He can also play in center back position which would be a bonus.
He had a good first season under manager Andres villas Boas. But after being hit by knee injury in his second season he could not get much playing time. So he may be interested in a move to Valencia CF.

It could be a good deal for both the parties.
Posted by ElninoPawan at 9:57 PM
Email ThisBlogThis!Share to TwitterShare to FacebookShare to Pinterest
Labels: transfer speculations
Newer Post Older Post Home