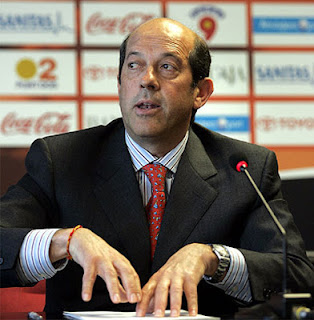 Wow huge news this morning, Valencia CF president Manuel Llorente has resigned from his position effective immediately. It was known that he was on hard times and could have had challenge for the presidential position, but no one expected him to resign.

At a press conference Manuel Llorente officially confirmed his resignation and said that he thought a lot about the decision, but ultimately he knew he had no to little support in the management and thus decided to give the reign to someone else, rather than try and fight the opposition, as he said to help Valencia CF and for the club to make progress.

The new president will be Fernando Giner until the summer where elections will take place to choose the new president. José Antonio García Moreno, has also resigned from his status as vice president.

What turn of events, this was very unexpected and very sudden. If Manuel Llorente thinks that this is the way forward and it would ultimately benefit the club, I'm okay with it, but hopefully Valencia CF will get a new president that will be great and maybe even have a good plan, though that is very unlikely.
Posted by SlickR at 1:37 PM
Email ThisBlogThis!Share to TwitterShare to FacebookShare to Pinterest
Labels: news
Newer Post Older Post Home