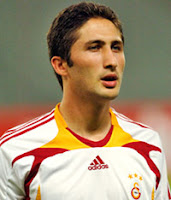 Valencia CF  is very closely following Sabri Sarioglu, reports sabah.com.tr, with the intention of buying him in the summer. He is a versatile Turkish footballer, enlisted in the ranks of Galatasaray, who can play as right wing and as right back.

Sarioglu has a contract with Galatasaray until June 30, 2014 and has an option to renew on the table.

Reports have it that Valencia CF scouts were monitoring him last night at the match between Galatasaray and Schalke 04.