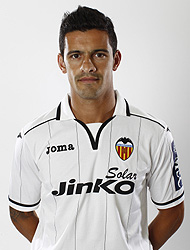 Valencia CF central defender Ricardo Costa in a press conference today said that he wants to stay at Valencia CF and extend his contract with the club.

He said: "People already know what I want and feel. I want to stay in Valencia CF, but its not only up to me, its up to the club, the president and sporting director as well."
Ricardo Costa added: "I always give everything when I play, I'm one of the captains of the team and I'm happy here, but the club must decide."

About the coach Valverde, Costa said: "He's doing very well and the players are comfortable and happy with how things are going. He said that in the beginning of the season the players and coach change affected the team's performance, but that now they are settled and with Valverde in charge they have better understanding with the coach."