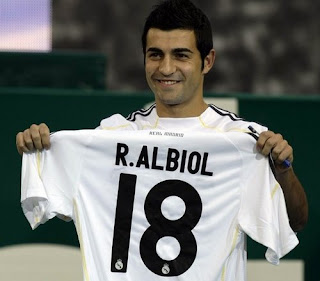 Its no secret that Manuel Llorente and for that matter the whole board of Valencia CF would like to see Raul Albiol back at Valencia CF as he is a Valencianista, played for the club for most of his life and has not found a regular starting place at Real Madrid, in fact almost every other player has been preferred over him to start matches.

As you know Raul Albiol hasn't featured much in Real Madrid at all and while he wasn't too keep on returning last season to Valencia CF, recently he has given signals that he may be open to coming back to Valencia CF. Valencia CF president Manuel Llorente has talked to his agent numerous times and reports have it that the last time they talked, Albiol's agent told them that he would like to return to Valencia CF.

Of course he has a long term contract with Real Madrid and he is not likely to come cheap. Valencia CF has good relationship with Real Madrid as the club has purchased several players from them in the past few seasons and also sold them Albiol. This means Real Madrid are not going to push for the absolute most they can get and would likely take about 8-10 million for Raul Albiol, of course assuming Raul Albiol would be serious about joining Valencia CF.

With recent reports that Anzhi is interested in Adil Rami and his buyout clause falling significantly next summer Raul Albiol could be a replacement for Adil Rami, assuming Rami doesn't extend his contract with Valencia CF or doesn't want to leave, which would be really hard, especially if some big salary offer comes his way with a lot more richer clubs than Valencia CF.
Posted by SlickR at 8:22 AM
Email ThisBlogThis!Share to TwitterShare to FacebookShare to Pinterest
Labels: transfer speculations
Newer Post Older Post Home