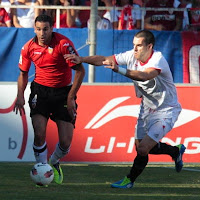 Adil Rami contract expires in 2015,so he still has a long stay if the buyout clause is not met, which could force Manuel Llorente to renegotiate and extend his contract sooner rather than later.

The player's representatives say, however, that Rami and Valencia CF have not received a concrete offer for the player.
Posted by SlickR at 4:12 PM
Email ThisBlogThis!Share to TwitterShare to FacebookShare to Pinterest
Labels: transfer speculations
Newer Post Older Post Home