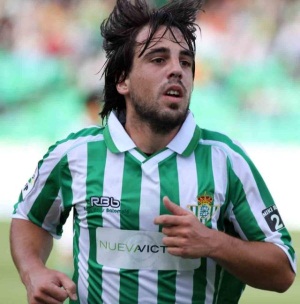 Real Betis midfielder Beñat Etxebarria has a contract agreement with them till 2014, but he has refused to extend his contract and will be leaving this summer. Last summer they got several offers of up to 10 million for him, but they rejected them all, but the following summer they will have no option but to look at offers as they don't want to loose him in 2014 for free.

Valencia CF is highly interested in Beñat Etxebarria and has already made contact with his representatives, trying to asses if he would like to join Valencia CF. Reports are that he would be interested in joining Valencia CF and while there hasn't been talks about salary he would be offered around 1.1 million euros, which would be over a million more of what he earns now.

Beñat Etxebarria is 26 years old and is one of Betis key players this season and last. He is a central midfielder the text book one and not a convert from attacking midfielder or defensive one. He has the playmaking skills, passing skills.

This would of course mean that Parejo, Tino Costa or even Banega may leave. I don't think its going to be Banega as he has huge talent and can play even better than his recent showings, but one of Tino or Parejo is very likely to leave. First there is the money issue, as Valencia CF would need to get the money and while they are going to get around 10 million for Diego Alves that would only cover say going in for Iago Aspas.