Valencia CF trying to get Vitolo 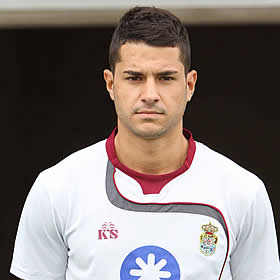 Valencia CF have been interested in Víctor Machín Pérez Vitolo since this past summer and tried to get him in combination with Jonathan Viera from Las Palmas, but Las Palmas rejected the bid as they wanted to keep at least one of their two best players.

Now Valencia CF is interested in bringing him again in the January transfer market in order to strengthen the wings and as the perfect replacement for Feghuoli who will leave Valencia CF to play in the African cup of nations for Algeria.

Las Palmas president Miguel Ángel Ramírez muddied the waters though by saying that Valencia CF are the prime favorites to sign the player, but he would like to keep the player for the whole season and will only sell him next summer. Of course this isn't in Valencia CF interest and the club might get away from the race to sign Vitolo if they can't get him this winter.
Posted by SlickR at 12:06 PM
Email ThisBlogThis!Share to TwitterShare to FacebookShare to Pinterest
Labels: transfer speculations
Newer Post Older Post Home