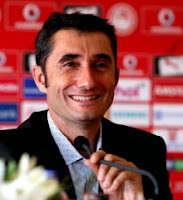 Previous reports were that Luis Aragones was the hot favorite to take Pellegrino's place, followed closely by Mauricio Pochetino.

Ernesto Valverde has most recently coached Olympiacos with which he won the Greek league two times, but resigned in 2012 citing family reasons for the resignation.

I got to say he is very experienced coach and did well with the clubs he's coached, but I'm not sure he is a top class manager for a top class club and certainly did a poor job with Villarreal following Manuel Pellegrini's move to Real Madrid.
Posted by SlickR at 4:28 PM
Email ThisBlogThis!Share to TwitterShare to FacebookShare to Pinterest
Labels: news
Newer Post Older Post Home