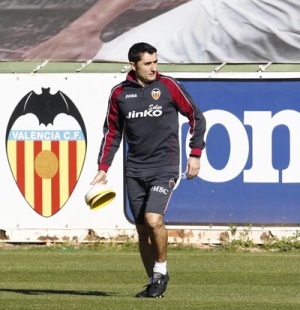 Valencia's new boss Ernesto Valverde certainly has a tough challenge ahead of him but the new head of Valencia CF seems to be ready for the task ahead.  His first order of business will be getting an underperforming squad to pull together as a team and play with more confidence.

Prior to joining Valencia, Valverde served stints at Espanyol, Athletic Bilbao, Olimpiakos, and Villareal.  He was presented to media on Monday at Mestalla and straight away he fielded questions ranging from squad discipline to whether he would be with the team long-term.

Valencia currently sits 12th in the Primera Division and the new coach admitted that taking on the team mid-season was going to be quite a challenge.  "It is the first time I have taken a team mid-season, I will be frank, I do not consider it easy," Valverde commented. "When you take a team in these circumstances it is because there is a crisis. The team is not top of the table and playing marvelously. So there is a rush to get some results. In that sense I accept the challenge. We will go for it."

One of his most important tasks will be finding a way to get his squad to perform.  Even captain Roberto Soldado admitted that the squad’s lack of results is the main reason that Mauricio Pellegrino was fired this past Saturday after a brief four month stint on the club.  It is said that he will need to have a firm hand with the squad should he wish to see better results.

On motivating the players, Valverde stated that "I have no doubt that I will find a group of young players who want to win games and be a team. There are objectives to fulfill and I understand that the players are professionals who owe something to this club and its fans. I will try and help them to work in the best way possible. About a 'firm hand' I do not have much to say."

Valverde would be wise to follow the example of Manchester United boss Sir Alex Ferguson.  He has been known to have a firm hand with many of his players and always finds a way to make them perform.  His players are successes both on the football pitch and off the field.  In fact, Jonny Evans recently won a Manchester U charity event that benefited an Irish hospice.  Much of the discipline that Evans showed to win the event came at least indirectly from Ferguson's firm hand at United.  With the amount of firm guidance, a coach can get his players to perform.

Finally, the coach addressed rumors that he was only with the club for six months and that he would be going back to Athletic at the end of the year.  He shot down these rumors stating that "I signed for six months because that is what they offered me.  I have no problem, I am confident in my work and that over this time the team will show enough good things that I will continue more time here. The objective is to qualify for the Champions League. Maybe that is speaking long term at the moment. What I am most concerned about now is that the team plays with confidence."

The switch thus far has seemed to produce positive results.  Valencia won their last match in the Champions League group’s stage on Wednesday against OSC Lille.  Jonas scored the game's only goal off a penalty kick in the 36th minute.  Now the question will be whether the team can continue their momentum and salvage what has been a disappointing season thus far.
Posted by SlickR at 8:52 PM
Email ThisBlogThis!Share to TwitterShare to FacebookShare to Pinterest
Labels: feature
Newer Post Older Post Home