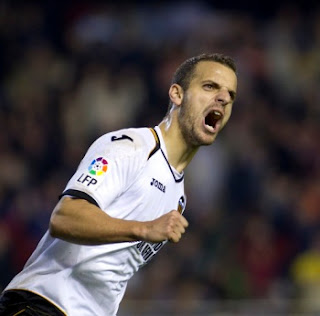 Valencia CF striker Roberto Soldado has been called up to the Spanish national team for the friendly match on the 14th November against Panama. Roberto Soldado has featured several times for Spain in a row already and his recent good form has helped him get called up again. Its looking like he is becoming a regular player.

Ricardo Costa has been called to the Portuguese national team after missing out a certain period, Joao Pereira on the other hand has been a regular and had of course been called up again.

Adil Rami has also been called up to the French national team and even though he has lost his starting place since the Euro's, he is still called up regularly and may even have a rare start in the next friendly match.

Diego Alves has once again been called up to the Brazilian national team and he has slowly made the starting position his, on the other hand Jonas Goncalves has been dropped from the team due to his poor showings there, as well as poor form at Valencia CF this season.

As already reported Alberto Tino Costa has been called to the Argentinian national team for the second time and he alongside Fernando Gago will feature for Argentina. Tino Costa has certainly deserved this call up with some great performances this season and good consistency.