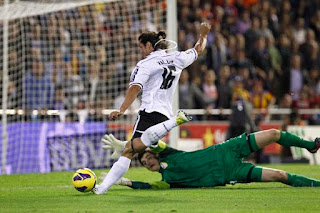 Valencia CF ended Atletico Madrid's long unbeaten streak and won 2-0 over them in what was a exciting match. Overall there weren't many chances on either side, Atletico Madrid threatened once in the earlier stages and then Valencia CF took the lead with an amazing volley by Roberto Soldado in the 20th minute.

Atletico Madrid would try to respond, but Valencia CF paired well and were fighting Atletico Madrid in the midfield, not allowing them to push deep into Valencia's third. That said what little Altetico did was dealt with by the defense.

The first half ended 1-0 for Valencia CF with both sides playing equal football and neither side having the upper hand in terms of performance. The biggest problem for Valencia was that it really did lack in attack as Jonas and both the wings were ineffective.

Second half started with Atletico Madrid attacking and for the most part controlling the proceedings, they had two decent chances with one was a shot from the left and then a header by Falcao. Valencia CF would have two decent chances as well through Guardado, both times he shot, but was shot was inaccurate and went went wide and above the goal.

Rami would develop some back problems and had to be replaced in the middle of the second half and later on Ricardo Costa and Valencia second coach would get red cards.

Ultimately the end was quite exciting as Valencia CF was holding on to dear life, but Nelson Valdez put an end to any doubt over who the victor was going to be when he made it 2-0 for Valencia CF in the 94th minute.

Player Ratings:
Diego Alves 6.5 - Had two great saves, otherwise not very secure in the air, but wasn't tested too much.
Joao Pereira 7 - One of his better matches in a Valencia CF shirt. Make sure no one beat him all night long, making some crucial tackles and blocks.
Rami 7 - Confident and secure, defended well alongside Costa, getting the better out of Falcao on most occasions. Was injured towards the end and replaced by Ruiz.
R. Costa 6 - Good defensive display, made few important blocks, but needless red card as he could have been more careful. The referee was no doubt harsh, but Costa should have known better.
Cissokho 6.5 - Secure performance, did his defensive duties well and blocked out Arda for most of the match. Did go forward to a certain extent as well, but was more subdued than other matches.
Gago 7 - Great command of the midfield, spread out the ball well and pressured Atletico's midfield consistently.
Tino Costa 6.5 - Run a lot and was always useful in defense, midfield and in more advanced positions, lacks ball controlling skills that Gago and Banega have, but makes up in other ways.
Feghuoli 7 - Not very effective going forward, though he did hold the ball effectively, keeping possession for Valencia CF and covered well defensively. Lovely pass late game for Valdez to seal the match.
Jonas 5.5 - Not very effective and barely saw the ball. What little he had of it was largely basic passes and should be worried about his starting spot prospects based on his performances this season.
Guardado 6 - Covered great defensively and did have few forwards runs, including two good chances, but the first one his shot was very poor and in the second one he decided to shoot again, instead of playing Soldado or Banega. So poor decision making and poor shooting skills, needs to do more.
Soldado 7.5 - Man of the match performance, even though he didn't have much chances at all. One chance was all it took and it was what basically won Valencia CF the match.
Subs:
Ruiz 6.5 - Replaced Rami and did just as well, making one important foul to stop Atletico's counter in its tracks.
Banega N/A - Did not have the influence I was hoping he'd have, but Valencia CF was already on the back foot and then reduced to 10 men. Hopefully with these appearances he'd get to his best form.
Valdez 6.5 - Came in and almost instantly scored to seal the match and give Valencia CF the victory in the dying moments of the match. Great anticipation, awareness and calmness to fool Courtosis and slot the ball into the net.