Valencia CF yesterday played a friendly match vs CD Alcoyano that was set up earlier, because of both clubs special relationship. 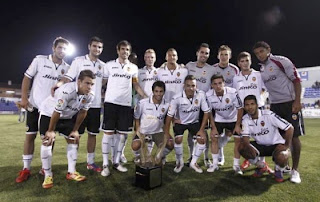 
Valencia sporting director Braulio Vasquez was doing some PR work the last few days and he said that Valencia CF will be looking to purchase a defender and defensive midfield in the winter transfer market, possibly a new right winger if there is a need for it.

He also mentioned that Nelson Valdez may be offered a 3 year contract with Valencia CF if he plays enough games for the team and contributes.

Superdeporte reports that Ever Banega will start playing in about a month and that he has been doing some physical work at training and recovering very well.

Valencia CF president Manuel Llorente on the other hand hosted the Chinese corporation WANDA which is the world’s largest cinema owner, with more than 400 theaters, having recently purchased the US based AMC entertainment company. Representatives met with Llorente for the program "Future Promises WANDA Chinese football" where 10 kids were brought in Valencia where they will train in the clubs youth ranks, while WANDA covers most of their expenses.

The other two clubs include Villarreal and Atletico Madrid. Valencia CF certainly gets a lot of exposure participating in this program and is likely to pike the interest of Chinese investors and sponsors.