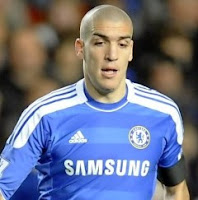 Nothing much is happening, since there is no club competition, but tonight most of the world cup qualifiers will be played and Valencia CF has quite few players on national duty.

Some recent news is that Valencia CF is interested in Chelsea's Oriol Romeu as a long term replacement for David Albelda, but from my sources this is completely false. But anyways Oriol comes from Barcelona youth school and he played for Barca's B team for two years, before joining the first team and instantly being purchased by Chelsea. He is a defensive midfielder who can also play as a central defender and is only 20 years old.

Then we have the news that Sofiane Feghuoli is likely going to play with his national team Algeria for the African cup of nations 2013 who are all but qualified. Algeria has played 14 times so far in the cup and next years its likely to be their 15th time. If this happens that will mean Valencia will loose Feghuoli for at least one month, possibly longer if Algeria does good in the tournament.

There is also some info that Roberto Soldado is going to actually start for Spain tonight against Georgia, after missing out completely in the last match.
Posted by SlickR at 11:22 AM
Email ThisBlogThis!Share to TwitterShare to FacebookShare to Pinterest
Labels: news
Newer Post Older Post Home