Wow what can I say, other than this match was not supposed to go this way. What is for sure though is that we saw two different Valencia's, one in the first half which scored 3 goals and dominated proceedings and another than conceded 2 goals, lost all possession and barely survived with a draw. 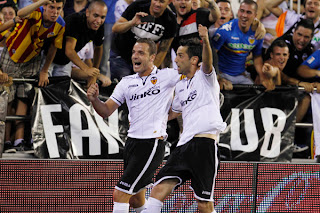 The match started in a dominating fashion for Valencia CF, controlling the proceeding from the onset and would threaten Deportivo instantly with few good runs towards their goal. With all that domination it wouldn't  be too long when Valencia CF would get their first goal of the match. Soldado would score, after being released by a great through ball by Jonas, passing the goalkeeper and calmly slotting the ball in the net.

Chance for Feghuoli in the 19th minute after a great cross by Joao Pereira found him perfectly, but he can't find anyone and the ball goes out of danger, only to get back to Jonas who goes in from the left side and crosses, but again the cross doesn't find anyone from Valencia CF there.

22nd minute great counter attack by Valencia CF, as Gago with a nice flick finds Feghuoli who runs forward and tries to cross twice, but he botches the crosses and basically hit the defending player twice.

27th minute brilliant goal from Soldado, after a brilliant action from the team. Tino flicks the ball perfectly for Jonas who avoids the offside trap and unselfishly bounces the ball to Soldado, who with an acrobatic move scores.

Ten minutes later though Deportivo La Coruna scores as Aguilar gets to the ball in a chaotic situation, after Joao Pereira failed to clear the corner kick with a header and the ball ended up around Aguilar, who nicely put the ball past Diego. 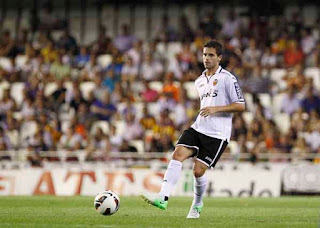 Gago would be replaced for some sort of injury I guess, hopefully its nothing serious and Parejo comes in his place and instant payoff as it was new sub Parejo who would provide the assist for Valencia CF third goal. Just after his arrival on the field Parejo provides a great through ball to Feghuoli who speeds past his defender and scores.

In the final minute Jonas with a great pass to Soldado, who finds himself alone on goal, but his shot is rather poor and hits the oncoming goalkeeper.

First half ended with Valencia CF leading 3-1 and the far better side so far.

Second half started in a similar fashion as the first half, in fact Soldado would have the first chance of the second half, after a mistake by Abel who provided a poor past towards the defense and Soldado was able to catch the ball, Soldado ran towards goal and tried to shoot, but his shot was blocked.

53rd minute Deportivo would start becoming more and more dangerous and Pizzi would fire a warning shot with his shot at goal, but Diego was alert and saves.

Just 2 minutes later Jonas would hit the crossbar, but the effort was deemed offside.

58th minute Aguilar would score his second goal of the match after another poor defending by Valencia CF. I mean it seemed like the whole defense was caught star gazing and none run to intercept the ball, especially here I'm looking at Ruiz or possibly Mathieu. 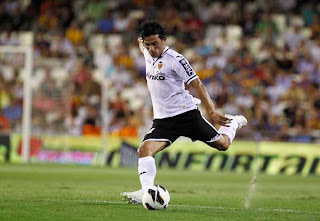 About 8 minutes later Pizzi would have another go at the goal, after Parejo looses the ball in the middle of the part with his clumsy shenanigans, he manages to shoot, but the Ruiz just manages to deflect the ball.

After constant pressure by Deportivo they would get their chance as the referee gave them a penalty, after Costa seemed to push one of the attackers down to the ground. Pizzi would step up to take it and would convert the penalty into goal. That was Costa's second yellow card by the way and automatic red, which means Valencia CF had to play with 10 players for the rest of the match.

84th minute Ruiz with a solo chance he created, passes to ball nicely to Parejo, but his shot is blocked and the rebound goes to Tino who shoots as well, but his effort is saved as well.

In the final minutes Bruno Gama has a solo run as well, gets away from his marker and manages to shoot at goal, but Diego with a good save.

That was in essence the match ladies and gentlemen and how things transpired more or less, but I can't finish here without at least a little bit of analysis of this match.

Obviously Valencia CF started great, controlled the proceedings, controlled possession and had great chances, converting 3 of them. The problems started showing up when Fernando Gago left and Parejo was introduced. Even though this actually payed off and Parejo provided the assist for Feghuoli's goal, it would come to hunt us in the second half.

First of all again we can see that neither Tino Costa nor Daniel Parejo can hold the ball and again I would reiterate my sound knowledge of the game and say Gago is not a defensive midfielder, but more of a holding/playmaker type who can control proceedings, in fact he is more like Banega than like Albelda or the Albelda types and we saw this with the great ball control and utter domination in the midfield when he was playing. Once Gago was subbed and Parejo came in, we instantly lost the midfield, but the team had the initiative at that time and it wasn't felt that much till the end of the first half.

This is actually not something new or strange, Parejo came in as an attacking midfield and he is not a central midfield and has proven this time and time again. He only played there last season, because Banega was injured and Tino either couldn't play all the matches and he wasn't that much better either.

Now Tino Costa is also an attacking midfielder, though can fit in more in the central role, because he runs more and has better defensive capabilities than Parejo.

Now again instead of blaming the players here, I think this is a coach mistake, as we saw that Parejo is a good player and can be useful to us, just not at the central midfield role, but much more forward. His pass for Feghuoli was great and that is the kind of play that Parejo does, he can not control possession on the other hand.

We also saw that Tino is beneficial as well when playing a good ball controlling midfielder like Gago, as his build-up play was fantastic and that flick to Jonas for the second goal was superb. The problem is that just like Parejo he is not really a central midfielder either.

So I just hope Gago does not have a serious injury, because that will be very bad, very bad and I just want Ever Banega to return as soon as possible.

Player Ratings:
Diego 6.5 - Not at fault for any of the goals, he was called to action several times and did very well. Caught a really dangerous shot at the ending stages of the match.
Pereira 5.5 - Started very bright, went forward on every opportunity and provided some great crosses, he was high in my rankings at that point, but then he ruined it all with his lack of clearance on the first Deportivo goal. He should have headed the ball and cleared, he had the chance. Did well later and defended well, but wasn't enough to improve his score.
Costa 5 - What can I say, I thought he did best from all of the other defenders and then he gives away a penalty with a needless foul and needless challenge there. Did well prior to the penalty, but penalty weighs in a lot more.
Ruiz 5 - Star gazing for the second goal, he was supposed to be all over the ball and clear it no problem, but not just him, but the whole defense was just standing there and doing nothing. Closed in after the fact, but it was already too late and Aguilar scored.
Mathieu 6 - Did well going forward and was really dangerous in few forward forays, did pretty well in defense as well, but was also beaten few times and went out of steam later on, forcing Pellegrino to substitute him.
Gago N/A - Did play great for about 20 minutes, then went missing, before being substituted for some sort of an injury I guess.
Tino 6 - Really great while Gago was in the field and provided possession for Tino, he was able to use the possession really creatively and provided some good passes, especially with the flick for Jonas. Second half it was miserable performance.
Feghuoli 6 - Two botched crosses early on, one ruined chance with lack of end product, did score the third goal, but apart from helping out in defense well, that was pretty much his contribution.
Jonas 8 (MotM) - Not to toot my horns, but I did say in my season preview that I expect Jonas to be the key player this season and I was right. Just brilliant performance by him, two amazing assists, intelligent movement and popped up in dangerous positions. Seems the added freedom under Pellegrino works great for him.
Guardado 5.5 - Not very visible and not very threatening. I think Pellegrino might have forced Guardado into the team a bit too soon and against two of the worst opponents he could have faced in Real Madrid and then his former club from just few months ago in Deportivo.
Soldado 7 - Second best player on the night, behind Jonas. Good understanding with Jonas and good team work for the two goals. Had one more chance after being released by who else if not Jonas, but failed to score.
Subs:
Parejo 5 - I give one point for an assist or goal and that was his positive thing that he did, after that it was just negative after negative. From giving the ball away at dangerous positions, to failing to link up play and failing to defend decently.
Rami 5.5 - Did not have enough time to rate him properly, but it did seem like the defense was more controlled and our goal safer with his arrival. Obviously Ruiz instead of improving, he is deteriorating and Rami would likely take his spot.
Barnat 5.5 - Didn't have much time to do much, but he had two good runs and created one chance for the team late on. The jury is still out on him.
Posted by SlickR at 2:11 AM
Email ThisBlogThis!Share to TwitterShare to FacebookShare to Pinterest
Labels: match report
Newer Post Older Post Home