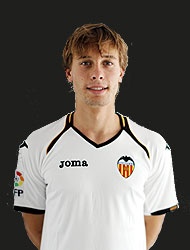 So far Sergio Canales hasn't shown much, mostly because he's suffered with 2 injuries of the knee and has been out for pretty much a full year.

Valencia CF will pay 7.5 million euros for Canales, steep price, but in the deal was also included Gago, so it balances itself out.
Posted by SlickR at 3:23 PM
Email ThisBlogThis!Share to TwitterShare to FacebookShare to Pinterest
Labels: official transfers
Newer Post Older Post Home