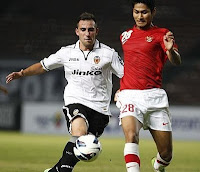 Valencia CF coach Mauricio Pellegrino announced at a press conference yesterday that Paco Alcacer will stay with Valencia CF and be part of the first team, but said that this does not mean Valencia CF won't purchase new striker and said that they already are looking to bring a new striker, but didn't mention who exactly, although various media think its Kevin Gameiro.

We may also see Rami, Viera and Albelda coming in as substitutes in the second half as they have overcame their injuries, but this is going to be a real test and so Pellegrino may not want to make many changes and may test the starting team that is going to be for the match against Real Madrid.
Posted by SlickR at 7:05 AM
Email ThisBlogThis!Share to TwitterShare to FacebookShare to Pinterest
Labels: news
Newer Post Older Post Home