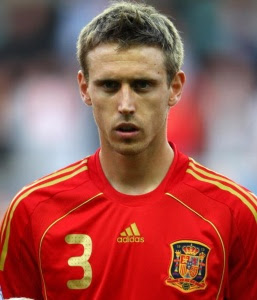 There were reports that Nacho Monreal may join Valencia CF since Malaga announced their yard sale of players due to financial reasons, but it seems Malaga has put a steep price tag on him and Valencia CF isn't ready to pay as much as they ask, so we are once again in the lookout for a new left back.

Valencia CF brought Didac Vila from AC Milan on loan, but an extensive medical exam unveiled a serious injury and Valencia CF returned him back to Milan, before that Siqueira didn't work out because of the transfer fee and Jose Angel from Roma got loaned out to Real Sociedad.

Right noe reports are we are looking at Emiliano Insua and he is Pellegrino's favorite because of the Liverpool days, but I don't think Sporting will sell him and his price is set to be around 8 million, which would make this deal impossible.
Posted by SlickR at 7:06 AM
Email ThisBlogThis!Share to TwitterShare to FacebookShare to Pinterest
Labels: transfer speculations
Newer Post Older Post Home