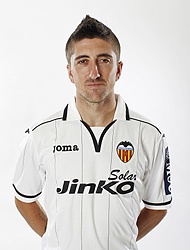 Finally this saga closes and we can move on. Pablo Hernandez was firm that he wanted to leave Valencia CF and join Swansea and so as I reported previously Braulio realized that having a player that didn't want to be in Valencia CF will only be detrimental to the team as a whole and decided on selling him.

There were some rumors towards the end that Pablo might stay after all and that Swansea backed down, but we now know those reports were lies.

As I said previously, I think this is a good move, as having a frustrated Pablo in the team would have been really bad and same as if he wasn't here. So a good move, the reported fee is 7 million euros and that is acceptable. I valued Pablo Hernandez at 8 million euros on my latest update, so we are one million short, but the options rather limited here.
Posted by SlickR at 11:07 AM
Email ThisBlogThis!Share to TwitterShare to FacebookShare to Pinterest
Labels: official transfers
Newer Post Older Post Home