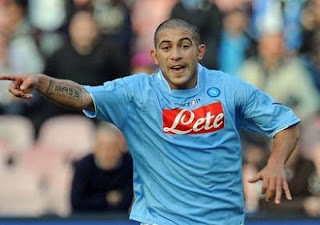 Well first of all few days ago Walter Gargano's agent came to Valencia CF to talk with the Valencia CF sporting director Braulio, as Valencia CF is interested in the services of Napoli's defensive midfielder Walter Gargano. Knowing what we know today, its likely that Watler's agent had a positive response to possible move for Gargano and we now know that Valencia CF has forwarded a 5 million offer to Napoli to sell Walter Gargano.

This offer is probably going to get rejected, but Valencia CF are willing to go as far as 7 million euros to bring Walter Gragano to Valencia CF, knowing that alternatives like Bruno Soriano and others will cost 10 million euros and more.

Walter Gargano is 27 years old, has played at Napoli since 2007 and has also feature for Uruguay's national team since 2006.