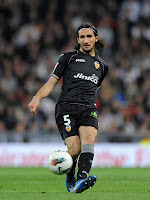 Mehmet Topal has been linked with a transfer to Fenerbahce and Turkish media in the past few days reported how its a done deal and how Topal is already a Fenerbahce player. Well Mehmet Topal demanded all the rumors and said that he is on vacation and has no intention of making a decision while on vacation and only after his vacation is over will he speak to the Valencia CF staff and decide about his future.

If Valencia CF can't get Bruno Soriano its likely that it will keep Mehmet Topal, although the biggest problem right now is Bruno's price tag which is at least 10 million euros.

Ultimately we'll see how things go and nothing is certain at this point, this could go either way.
Posted by SlickR at 7:42 AM
Email ThisBlogThis!Share to TwitterShare to FacebookShare to Pinterest
Labels: news, transfer speculations
Newer Post Older Post Home