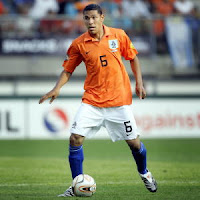 Superdeporte reports that Valencia CF have offered Hedwiges Maduro a two years contract extension. Maduro is right now in Holland working with his national team and has said that he wants to continue somewhere where he'll get more playing time so he doesn't loose his chances for playing for Holland.

Hedwiges Maduro is going to make a decision in at most two weeks and we'll see what his decision will be, but don't be surprised if he decides to leave, although so far no team has shown interest for him.
Posted by SlickR at 10:21 AM
Email ThisBlogThis!Share to TwitterShare to FacebookShare to Pinterest
Labels: news
Newer Post Older Post Home