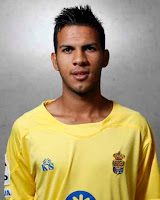 Its official, Jonahtan Viera is a Valencia CF player. Valencia CF and UD Las Palmas have reached an agreement over the transfer of attacking midfielder Jonathan Viera for a price of 2.5 million euros.

The transaction includes a payment schedule that begins with the release of one million euros to sign the contract. During the season 2012/2013, Valencia will face paying another million euros. The remaining 500,000 euros paid in two installments, € 250,000 each, the first two times the club reach the Champions League over the next five years, or in case of transfer.

Jonathan Viera is 22 years old attacking midfielder who started his career at UD Las Palams B team, but in just two years was promoted to the senior team where he has played two years and scored 15 goals for that time.

The agreement will be officially announced at a press conference in few days.