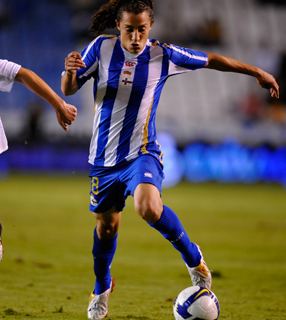 Spanish website Joranda reports that Andres Guardado has been given time off to come to Valencia. While not certainly known the exact reasons, it is widely believed that he has come to Valencia CF to finish up the last details of his contract with Valencia CF.

It was reported for more than half a year now that Guardado has signed a contract with Valencia CF and that he'd join the team first thing, so the fact that he has traveled to Valencia is not surprising.

Adnres Guarado's contract with Deportivo La Coruna officially expires on 30 June, so therefore he probably can not become a Valencia CF player earlier. So far it is looking certain that he has indeed finalized any details about his contract and is a safe bet that he'll become a Valencia CF player in a month or two.
Posted by SlickR at 10:58 PM
Email ThisBlogThis!Share to TwitterShare to FacebookShare to Pinterest
Labels: news, transfer speculations
Newer Post Older Post Home