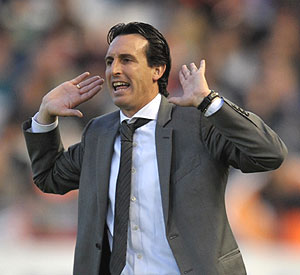 Valencia CF coach Unai Emery has been under increased pressure for the past month, after a very poor start to the second half of the season in which if we don't count the points from the first half would be fighting to avoid relegation.

On the back of few new losses in Spain and in the Europa League he is given an ultimatum to win and if Valencia don't win he could be out of the team. Manuel Llorente is supportive of the coach, but he is also pressured from the board and if he wants to stay president of Valencia may succumb to the pressure to fire Emery.

So tonight's match may as well be Emery's last and unless the team form changes drastically and we gets several wins in a row he is going to be under constant pressure. A little bit reassuring is the fact that Valencia CF has beaten Levante pretty easily 3 times before this season.
Posted by SlickR at 12:16 PM
Email ThisBlogThis!Share to TwitterShare to FacebookShare to Pinterest
Labels: news
Newer Post Older Post Home