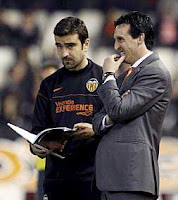 A radio station in Spain reported how Unai Emery has told the players that he won't coach Valencia CF next season. This is the supposed talk: "I hope we are able to win a trophy and qualify for the Champions League next season, but I won't be your coach then".

Speculation and reports about Emery's departure have been going on for quite a while now, with the second part of the season being really miserable for Valencia CF. While many international fans showed their support for Emery and in my poll were only beat out by 1 vote to AVB to be Valencia's coach next season, its almost certain Emery will leave in the summer, if not sooner.
Posted by SlickR at 4:17 AM
Email ThisBlogThis!Share to TwitterShare to FacebookShare to Pinterest
Labels: news
Newer Post Older Post Home