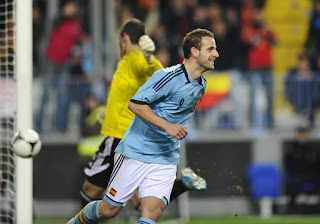 Spain:
Jordi Alba started and played the full 90 minutes for Spain and he had a great match providing 2 assists and never troubled at the back.
Roberto Soldado was introduced at the start of the second half as he came on for Llorente and pretty much immediately scored. He scored a second goal soon after his first as well, got a penalty after being brought down as he found himself alone in front of goal after passing the goalkeeper. He missed the penalty, but went on to redeem himself and scored a hat-trick in the final minutes of the match.
This was an amazing performance by Soldado as he made the case to be included for the Euro 2012.

Brazil:
Diego Alves was called in for Brazil, but sat out their match against Bosnia and Herzegovina. Cesar had a poor match though and Alves chances of becoming the first keeper are very big.
Jonas Goncalves literally was put in the game in the last minute.

Turkey:
Mehmet Topal started and played the full 90 minutes for Turkey and was one of their better players, but unfortunately for him Turkey lost 2-1 to Slovakia.

Portugal:
Ricardo Costa did not feature for Portugal and its highly unlikely if he'll make the squad for Euro 2012.

France:
Adil Rami played the full 90 minutes for France and had a good match with few decent interventions. Good, but not great. He still has a lot to learn and much to improve.
Posted by SlickR at 3:59 AM
Email ThisBlogThis!Share to TwitterShare to FacebookShare to Pinterest
Labels: news
Newer Post Older Post Home