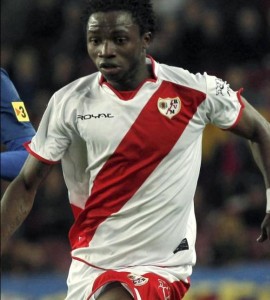 Alhassane “Lass” Bangoura (born on 30 March 1992 in Conakry) is a Guinean footballer who plays for Rayo Vallecano in La Liga, as a forward or a left wing.

He is obviosly a reinforcement for the left wing, as this season the lack of options there has been really exposed and Emery has been forced into using Mathieu as a makeshift left wing.
Posted by SlickR at 7:21 PM
Email ThisBlogThis!Share to TwitterShare to FacebookShare to Pinterest
Labels: news
Newer Post Older Post Home