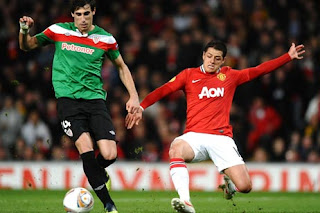 Valencia CF is interested in Javi Martinez from Atletico Bilbao and Bruno Soriano from Villarreal.

Javi Martinez has been Bilbao's star for at least 2 years now and has had tremendous success with his club and national team in all range groups he's played.

Valencia's top officials want to get rid of Maduro in the summer and whispers have it that they are not too pleased with Topal either so they are looking for someone young and talented to strengthen that position and be a long term investment as well and Javi Martinez fits the bill perfectly.

Another player Valencia CF is monitoring and has expressed interest is Villarreal's Bruno Soriano. Valencia CF is impressed with Soriano and has contacted Villarreal to ask about the player. With Villarreal being is such a bad shape financially and sporting wise its very likely a deal can be made if the price is right and the player is likely to want to join Valencia CF.
Posted by SlickR at 3:00 PM
Email ThisBlogThis!Share to TwitterShare to FacebookShare to Pinterest
Labels: news, transfer speculations
Newer Post Older Post Home