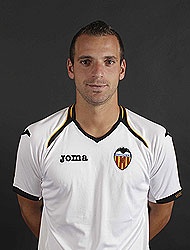 Days ago Vicente Del Bosque released the list of players to feature for Spain and Roberto Soldado was on that list on the place of Frenando Torres. Jordi Alba was also called in and continues to steadily feature for Spain, but this makes him more and more close to Barcelona as well.

Adil Rami was also called in for France. Jeremy Mathiey did not found his name on the list, as Patrice Evra and Eric Abidal both returned to occupy the left back position.

Mehmet Topal has been called for Turkey national squad for their friendly match against Slovakia.

Jonas and Diego Alves both got called back to the Brazilian team and it seems both are becoming regulars, especially Diego Alves who with the fall of Inter's goalkeeper Julio Cesar has got the opportunity to become Brazil's next starter goalkeeper.

Hedwiges Maduro is still not fit, but he is likely to get a call anyways for Holland, while Victor Ruiz who's shown some good plays is still on the waiting line for Spain, even though Albiol has been removed now and Spain continue to have defensive problems.
Posted by SlickR at 5:37 PM
Email ThisBlogThis!Share to TwitterShare to FacebookShare to Pinterest
Labels: news
Newer Post Older Post Home