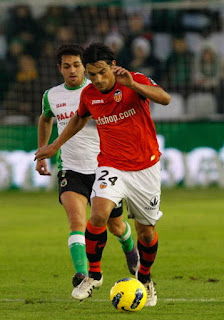 Yesterday was a bad day for Valencia CF as the team is now on its 3rd draw and one loss three weeks in a row. The match against Racing was very important for Valencia CF to get back on the winning track and Racing represented a good opportunity as even though their last 5-6 matches have been decent their attack was poor and defense average and in the bottom of the table.

The match started really weird with the midfield duo of Ever Banega and Tino Costa clearly not working properly. Racing  also came very early to a lead through Munitis who provided the assist and Adrian who scored.

Then Emery took off Banega in the 30 minutes with now it seems a knee injury. Topal came on to replace Banega. With one defensive midfielder now Valencia CF actually started playing better and Tino had a good match dictating play and keeping possession for Valencia CF.

First half didn't have many chances, except in the 21th minute when Jonas shot from up close, but only at the goalkeeper. 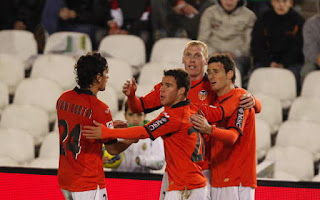 The second half was quite uneventful as well and it wasn't until Aduriz came in that Valencia actually managed to score with one of their little chances. It was Aduriz after a corner kick by Tino Costa in the 66th minute.

Then in the 79th minute Aduriz would score again this time with his header after a powerful shot by Ricardo Costa was blocked by the goalkeeper but only towards the oncoming Aduriz who gave Valencia CF the lead.

The happiness would not last long as Topal had an accident with some Racing player going head to head and having to play with 10 men and Racing would use that and score in the 88th minute to level the score.

With all the time wasted through injuries the referee awarded 7 minutes of additional time in which Ricardo Costa got a red card after some saber rattling with some Racing player.

Racing would have have the last chance in the 96th minute, but Alves would do a good job and make a save to keep the result at 2-2.

Player Ratings:
Diego 4.5 - Did a poor job. Wasn't tested too much, but could have done better for the two goals and even though he had one great save in the 96th minute, it was a poor performance overall.
Barragan 5.5 - Did well going forward and not particularly troubled at the back.
Costa 5 - Not very reassuring performance, although not directly at fault for the goals.
Ruiz 6 - Had few good blocks and that seems to be his overall strength, did a good job overall.
Mathieu 4.5 - Made several mistakes and one particular awful foul that earned him a yellow. Probably too fast to play after coming from injury.
Tino 7 - Great play by Tino who really shined after Ever was subbed and provided the assist to Aduriz first goal.
Ever 5 - Very poor play and obviously injured with reports now have as knee injury.
Feghuoli 4.5 - Lost too many balls and way too ineffective on the wing.
Jonas 5 - Mediocre performance and the highlight was a shot early on that went straight to the goalkeeper.
Piatti 5.5 - Quite active and seems to be performing better, probably a little tired tonight after a match only 3 days earlier.
Soldado 5 - Very ineffective and was nowhere to be seen. I feel like Emery should give him longer breaks from time to time as he has been one with the most minutes.
Subs:
Topal 5.5 - Did better than Ever and was actually a factor in play with some neat and simple passing and a better defensive job. Had a small brain damage after a collision head to head with another player.
Aduriz 7 - Great play by Aduriz scoring two goals after coming one. Some good poacher goals. He too suffered small brain damage and temporary loss of memory after a similar collision with one of the Racing defenders.
Bernat N/A - Not enough time.
Posted by SlickR at 6:09 PM
Email ThisBlogThis!Share to TwitterShare to FacebookShare to Pinterest
Labels: match report
Newer Post Older Post Home