Daniel Parejo is a liability and we need him out! 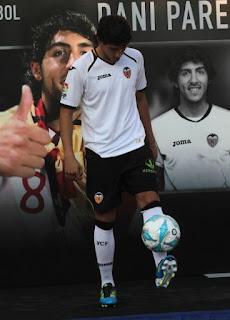 Daniel Parejo has not settled at all in Valencia CF. He arrived as a big talent in Valencia CF and one to basically take over from Banega if he was to leave, but since Banega stayed it didn't go well for him.

Banega was obviously playing the best football of his life and no one was going to play instead of him, not Parejo or Tino or anyone. Then Banega got injured and it was Tino who got the change and he instantly proved himself as he went on to play some crucial games.

Its not that Parejo didn't get a chance, its that when he got a chance he never used it. He never stood out, he did not do something no other can do and did not even seen interested to try really hard.

Since the circumstances were as such he began complaining a lot and had his agent speak with the sporting director to get Emery to give him more chances and that was the case. Emery did give Parejo more chances, but these were chances from a substitution spot as Valencia CF was playing crucial matches that it just couldn't afford to come out with a weaker squad and loose.

In all of his time on the pitch not once has Parejo been good, in fact he has been below average and if he is to blame anyone its himself because he is not good enough and needs to work 200% harder and put blood and sweat into getting better in order to have more chances so he can prove himself.

But no, he has chosen the blame everyone, but himself, an easy way out and one that all too often we see in human nature. But this just shows his weak character and we don't need a whiner who isn't even good to be destroying the atmosphere in the team and I urge Braulio to sell him at once and use that money to secure the transfer of Van der Wiel.

I don't want anyone to defend Parejo and blame Emery for this and say he didn't give him enough chances because that is just not true and players like Feghuoli, Canales, Alba, etc... have all been second choice to Pablo, Jonas and Mathieu respectively before Canales overtook Jonas when he was fit and Feghuoli overtook Pablo and Alba even though has not overtook Mathieu does regularly start.

So this is a question of how good a players is and obviously Parejo isn't better than Tino or Banega to start over them!
Posted by SlickR at 8:36 PM
Email ThisBlogThis!Share to TwitterShare to FacebookShare to Pinterest
Labels: editorial, feature
Newer Post Older Post Home