Spain 3-1 Scotland; Jordi Alba
Jordi Alba had his debut match for Spain and he didn't disappoint. Immediately he grew comfortable and started playing to his potential setting up David Silva for the first goal. He continued to bombard forward and linked up well with former Valencia CF players Villa and Silva on the left.

In fact Jordi Alba outdid Sergio Ramos who played on the right and I think this just earned him a call up for the Euro 2012 tournament. 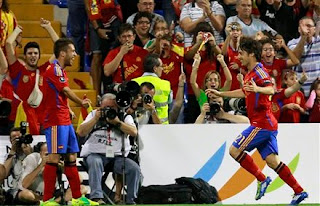 France 1-1 Bosnia&Hercegovina; Adil Rami, Jeremy Mathieu
Adil Rami was a rather poor match against Bosnia&Hercegovina as he allowed Edin Dzeko to score the opening goal. He did marshal everyone in the air, but this wasn't his best performance in a French shirt.

Jeremy Mathieu did not have luck once again and will wait for a other time to try and get into the French team. Right now it doesn't seen as Blanc will take him to EURO 2012.

Argentina 0-1 Venezuela; Ever Banega
Ever Banega didn't start the match, but was put in rather quickly in it after Argentina went down 1-0 to Venezuela. Surprisingly though he was unable to steer the match in favor of Argentina, but its hardly his fault as the whole team before him was performing terribly.

Turkey 1-0 Azerbaijan; Mehmet Topal
Mehmet Topal started and played the full 90 minutes for the Turkish national team in their win over Azerbaijan.

Brazil 2-1 Mexico; Jonas Goncalves
Jonas once again played for the Brazilian team, but just like the last match he only had few minutes and wasn't able to do much.

You already know that Hedwiges Maduro is injured and Ricardo Costa did not feature for Portugal once more, just showing that Portuguese coach doesn't trust him, contrary to what Ricardo Costa claimed.
Posted by SlickR at 2:03 PM
Email ThisBlogThis!Share to TwitterShare to FacebookShare to Pinterest
Labels: news
Newer Post Older Post Home