Guaita 6 - Made two great saves in the first half and was confident when coming forward punching. Let down by the defense for the goal.
Miguel 5 - Mixed bag as he and Costa failed to react to clear the ball early on which could resulted in goal, but Guaita saves two times and was after called offside. Had one more blunder in the second half.
Costa 4 - What a bad performance from Costa. Miscommunication with Miguel for the chance and goal that was ruled offside and again miscommunication with Ruiz for the goal. Lost Llorente twice in dangerous positions and couldn't really cope with the attacker.
Ruiz 6 - Cleared up for Costa so many times, but with Costa on his side our defense looked vulnerable.
Mathieu 6.5 - Did really well in the first half with few attacks one after another and generally did well in defense.
Topal 6 - Wasn't good in the first half, he was slow to react and failed to link up well with Banega, but improved in the second half and provided a good performance.
Banega 7 - Had a good first half with few great through passes, but failed to control the game as he was put under pressure, a lot better in the second half though and provided the assist to Soldado for the goal.
Feghuoli 6 - Really fought for every ball and covered every position, but wasn't the threat on the flank that Emery would have hoped him to be. Provided good support, but largely ineffective.
Canales 5 - Had a good chance in the 4-5 minute which he missed from a very close range, complained to injury from the start and guess it weighted down on him hard as he failed to do anything.
Jonas 6.5 - Had a good showing tonight with few tries and especially the try in the first half with an empty goal, was a bit unlucky there. Did well overall, but needs to start scoring himself and be more of a threat.
Soldado 6 - Way out of form and even though he scored didn't look particularly good.
Subs:
Piatti 6 - Replaced Canales in the 36th minute and did better, but lacks the cutting edge and failed to threaten Bilbao's goal.
Pablo 4 - All he did was enable Bilbao to score. Would have been better if he didn't come on. I feel like Pablo is once again in one of his slumps and hopefully this time it lasts shorter and not two months like last season.
Aduriz N/A - Was very active on the field and tried hard, but ultimately didn't add anything to the attack that Jonas didn't provide. 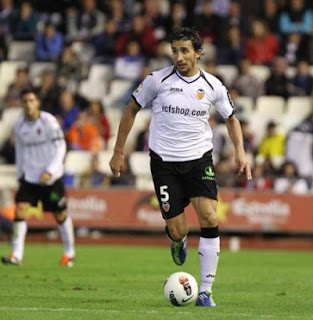 I think we were unfortunate in this match and for that matter against Mallorca as well. We also had a penalty rejected twice and things would have been different in we were awarded a penalty. I think maybe Emery should think playing Tino or Parejo in the attacking midfield role that Canales is currently playing, because so far I've only seen really one great game by Canales and in all the others he has been rather mediocre.

As we know Tino Costa and Parejo are both attacking midfielders and actually not central midfielders, so I think Emery should try with one of them being behind the striker.

We also lack the depth on the wings and this is where Mata came in last season. Right now we are basically forced to play Mathieu as left wing, because he is our best winger.