Guaita 6 - Had a very quiet match with no saves apart from few punches.
Bruno 7 - Good defending and decent in attack, managed to provide a brilliant assist for the goal.
Dealbert 7 - Great defending and is showing that he can be relied upon when needed. Made few crucial interceptions and blocks.
Ruiz 6.5 - The weaker of the defending duo and while he was good on average he did make small mistakes.
Alba 7 - Made few mistakes early on in the first half, for example had two back-passes that went to Zaragoza and didn't do much it attack. Improved in the second half as he was put as a winger and made few good runs and scored the only goal.
Topal 6 - Made two great interceptions stopping Zaragoza's attack and provided some nice passes at times, but very limited in his contribution.
Banega 7 - Great performance with few mistakes, though what he has going for him is that everyone knows he's our main player and is immediately pressured. Still did great though and all play started from him.
Piatti 5.5 - Put on the right side, but it didn't have any positive effect. He was still very limited and couldn't really do anything even though he tried really hard as always.
Parejo 5.5 - Had few touches here and there and provided some outlet to pass to, but not much else. Needs to really step us his game and step it up soon.
Feghuoli 7 - The most active member of the team, run as if there is no tomorrow and was everywhere on the field left, right, attack, defense, midfield, everywhere. Had some good passes too and some slick one-two play with Soldado and others.
Soldado 6 - Was involved in some of the actions and link-up play and that brings him points, but he needs to score its pure and simple and should be in more dangerous positions and be able to score in any way.
Subs:
Mathieu 5.5 - Did well enough defensively and had one or two forward runs, but did not contribute too much.
Jonas 6 - Good showing as he immediately started linking up play and provided some much needed attacking depth, but did not threaten the goal directly.
Aduriz N/A - Not enough time 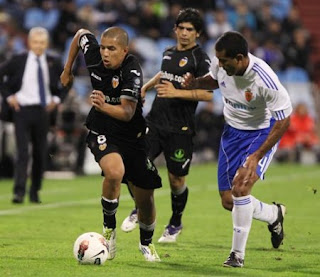 Lucky win as we were destined to get a draw with no shots on goal in the first half and no real chances in the second half. That Bruno assist was one off and I wouldn't expect him to get another one even in a million years.

So yeah even though we won it was a lucky win and it could have easily resulted in a draw, but luck was on our side this time. This doesn't mean that we are good to go though, as our attacking play is really lacking and we either can't score the chances we create or don't create any chances other times.

I'd like to suggest to Emery who probably has a translator reading him my blog to try and play Tino Costa as an attacking midfielder. That is his actual position and even though he played good last season as a CM, I think this season we should play him AM and I'm sure we are going to have a lot more chances going on, as well as someone that can shoot from far.

I also think Emery should play some of these "weaker" teams with two attackers in a 4-4-2 position and put Aduriz and Soldado in. I mean do you remember last season how many times the 4-4-2 formation with the Aduriz-Soldado duo has saved us from defeat? So why play Jonas so much with mixed results and not start Aduriz and Soldado together. Plus they complement each other very well as one is a more direct poacher type attacker and the other is a more powerful header attacker.
Posted by SlickR at 9:14 AM
Email ThisBlogThis!Share to TwitterShare to FacebookShare to Pinterest
Labels: player ratings
Newer Post Older Post Home