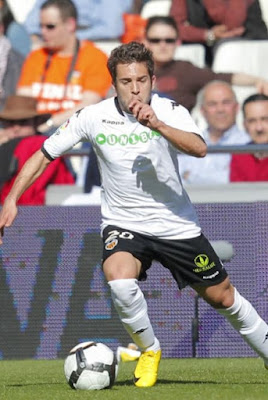 Paco had gotten a lot of attention in the summer with his great performances in the Spanish youth teams and several teams and the likes of Barcelona have been closely following him and with his current buyout clause at only 9 million he could be poached right under our noses just like Isco was.

The new contract is set to improve his salary, add new bonuses and guarantee first team place next season, to which Valencia CF has agreed, but is negotiating the details of just how much money increase will Paco get and from the looks of it, not too much. He is going to be one of the lowest earners.

Valencia CF have also started contract negotiations with Jordi Alba with his contract set to expire in 2013, the team management want to renew his contract as soon as possible. Jordi Alba has been performing great this season, even starting over Mathieu and in other cases playing alongside Mathieu on the left side. His good performances haven't gotten unnoticed and he was called for the first side for the Spanish national team.
Posted by SlickR at 6:07 AM
Email ThisBlogThis!Share to TwitterShare to FacebookShare to Pinterest
Labels: news
Newer Post Older Post Home