Valencia CF just won its second match of the season in what was a very competitive match and a bit of a breath holder towards the end when Valencia CF was defending the 1 goal lead and Atletico Madrid ruthlessly attacking.

Unai Emery decided to rest Ever Banega and Topal so they could be ready for the Champions League match against Genk which is coming up this next week.

Gregorio Manzano started with a 4-3-3 formation with their new start signing Falcao starting the match, along with Adrian and Reyes in the attack. 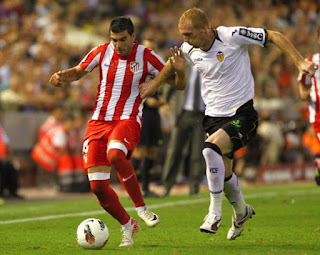 As soon as the match started Mathieu went forward and tried to pass the ball forward to Soldado and Pablo, this cause a bit of a mess before the Atletico penalty area, but the danger was cleared.

Later Piatti and Miguel combined on the right side and Miguel was quite up front and could have done something useful, but he decided to dribble and lost the ball.

After few minutes of just midfield play Mathieu made a solo run past three Atletico Madrid players, but his shot was innacurate and went wide of goal.

Albelda or Tino just 2 minutes later made a long through pass that found Soldado, who was basically left alone facing goal, but his shot was saved by Atletico goalkeeper Thibaut. Someone from the Atletico made a mistake trying to take the ball forward and Miguel stole the ball passed the ball towards Piatti, but he felt on the ground and the danger passed.

In the 17th minute Mathieu was once again surging forward from the left side, he crossed the ball to Soldado, but Miranda stole the ball from his legs and cleared the danger. 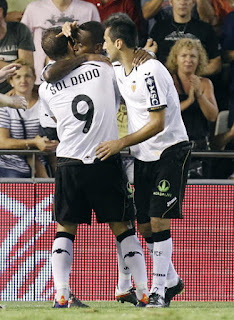 After a failed Atletico attack Piatti would get the ball on the counter, pass it to Pablo and this one cross it to Soldado who managed to make a pretty big miss there.

Atletico would push harder in the coming minutes and it would pay off as Adrian gets the ball alone in front of Guaita, courtesy of Albelda who played him onside, but Guaita would have a great reaction and save the goal.

Then in the 33rd minute Atletico has a counter attack in which Reyes shots but wide off goal.

Valencia CF would manage to get back the possession and mount an attack and once again it came from Mathieu on the left side who crossed the ball,m Soldado got into position and headed the ball but the goakleeper punched, but the ball would deflect to Pablo who passed in to the oncoming Jonas, but his shot would be miserable and go way off goal.

First half ended zero to zero in what was a better half for Valencia CF as we had more chances to score, as well as one decent penalty claim.

Second half and Atletico Madrid would threaten immediately with a shot by Falcao, the ball hit someone and deflected and after a bit of a mix up in the penalty area the ball went between Rami and Guaita and finally Guaita claimed the ball. 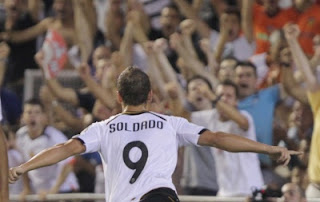 Valencia CF would not be outdone and would score a goal in the 51st minute. Miguel gets the ball and makes a good cross in Atletico penalty area and Soldado went into the right position and headed the ball past Thibaut and into the net. Valencia CF was up 1-0 over Atletico Madrid.

After this there would be a lot of midfield battle and small semi-chances for both clubs, the most notable ones being in the 66th minute when Reyes makes a dangerous cross in Valencia penalty area, but the danger is cleared. Then Atletico would have a penalty claim after Rami pushed Gabi or someone, but the referee would waive play on.

Unai Emery would make changes and increase the defense a bit with the arrivals of Jordi Alba and Topal on the field. Atletico Madrid would then start attacking non stop and they would have a great chance to score in the 82nd minute, but Guaita makes an amazing save from a Reyes shot.

Ultimately Valencia CF players would close out the match and beat Atletico Madrid in the 3rd matchday of the season. Valencia CF with this victory is currently in second position behind Real Madrid, after Barcelona only managed a draw tonight.

Player Ratings:
Guaita 6.5 - Had two great saves, not much else as he wasn't really tested, but made the saves when it mattered.
Miguel 7 - A bit shaky in defense at the start, but made up with good offensive runs and even though his passing was suspect at times he offered great depth on the right flank and provided the assist to Soldado's goal.
Rami 6 - Good showing tonight, wasn't perfect and there were some scary moments, but ultimatelly he and Ruiz didn't allow any goals.
Ruiz 6.5 - Had 2 suspect moves early on, one was a silly miss on the ball and was lucky the referee whistled a foul, but improved later on and made a dozen of good tackles and blocks.
Mathieu 8 (MotM) - Amazing display from the Frenchmen who played as a left winger tonight and yet did his defensive duties superbly. Constantly going forward and providing good crosses and passes and wasn't beaten one on one in defense.
Albelda 6.5 - Good game by the veteran who even though played Adrian onside early on it didn't result in a goal and went on to provide good cover for the defense without any mistakes.
Tino Costa 6.5 - Had a good game, provided an outlet for the wingers especially on the left, had a shot on goal and was decent in keeping possession.
Pablo 6 - Full of running tonight and tireless work in attack and defense, but apart from a pass to Jonas in the first half wasn't particularly threatening for Atletico.
Jonas 6 - Way weaker performance from last match, wasn't very effective in anything and even though he had few nice touches and passed also had a pretty bad miss and wasn't too dangerous.
Piatti 6 - He had few runs on the left and went into some good positions, but failed to capitalize on them and do much. Need to work on the final ball.
Soldado 6 - Scored the only goal in the match which is positive and was in good position early on to receive a pass and shoot towards Atletico goal, but also had a great chance to score and he missed miserably.
Substitutions:
Alba 6 - Went in when Atletico was fully attacking and didn't contribute any in attack, but added a bit more cover in the defense although he was beaten few times. Lucky to have had those attacks blocked by others.
Topal N/A - Not enough time to rate, although covered well at the back, but wasn't convincing.
Canales N/A - Not enough time, but he also wasn't very convincing in the time he had.
Posted by SlickR at 12:54 AM
Email ThisBlogThis!Share to TwitterShare to FacebookShare to Pinterest
Labels: match report
Newer Post Older Post Home