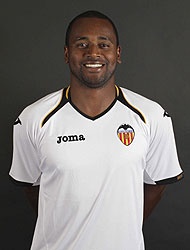 Miguel Brito was in negotations over rescinding his contract with Valencia CF for the past few days and the nogotations lasted all the way until the very last hour of the transfer window.

Miguel Brito wanted 3.2 million euros payout for his wages and bonuses or in other words every cent he has following from his contract, but Valencia CF weren't prepared to pay that much money and were hoping to let go of Miguel for no more than 1.5 million euros.

I think this is good news, the new right back signing Antonio even if turns out to be decent will need at least a month to get used to his new surroundings and the type of football Valencia CF play and with the recent injury of Bruno we need Miguel Brito more than ever.

Also when Miguel is in good form he is great on the pitch and ultimately that is whats important.
Posted by SlickR at 10:08 AM
Email ThisBlogThis!Share to TwitterShare to FacebookShare to Pinterest
Labels: news
Newer Post Older Post Home