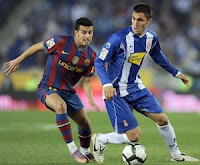 There is still no word on what the amount was to sign Ruiz, but reports have suggested as much as 8 million euros to persuade Napoli to sell him.

Valencia CF has agreed terms with the player and he will stay for 5 years at Valencia until the year 2016. He is also said to be a low earner with no more than 1.2 million euros per season. His young age also makes him a possible long term solution in defense, depending on how he turns out of course.

Ruiz arrived in RCD Espanyol's youth system in 2006 at the age of 17, from Catalonia neighbours FC Barcelona. In 2008–09 he made his senior debuts, helping the reserve side win its Tercera División group, and subsequently promote in the playoffs. On 6 December 2009, Ruiz made his debut with Espanyol's first team, starting and being booked in a 0–4 home loss against Racing de Santander. Coach Mauricio Pochettino, however, fielded him in a further 21 La Liga games that season, with the team finally ranking in 11th position.